I had my 28 week midwife check on Tuesday the 4th of December 2018. Everything was fine! By the Friday I was in North Devon District Hospital diagnosed with pre eclampsia with dangerously high blood pressure. After a scan in the morning, we were transferred to Exeter as Savannah had stopped growing at 26 weeks and NDDH couldn't have a baby that little on the ward. After a week in Exeter being monitored it was time for her to come out at 29 3 weeks, weighing 1lb 9 oz (884g) on the 14th of December. During our stay we were given a tour of the NICU which was so helpful and were able to talk to nurses about what being on the unit was like.

We were lucky enough to have a family room and we made ourselves right at home! We made sure we were there for ward rounds every morning to soak up as much information as possible. We were both allowed to cuddle our baby on days 2 and 3 and from then on we cuddled that baby for a minimum of 6 hours a day. In between that we had support on pumping breast milk, were taught how to tube feed, how to read her chart to see how she had been through the night and were giving as much responsibility as possible to look after our baby. Being in over Christmas and New year we booked a table in the restaurant for dinner, the unit had been given presents by other parents to give out, the nurses made footprint cards and we even had a visit from Santa! It was certainly a Christmas we won't forget.

After 3 weeks it was time to move back to NDDH which felt terrifying. We were transferred with Savannah and I in the transport with Leo following behind with a car full of breast milk!

Upon arrival we were in a separate room on SCBU. Due to someone else in the transitional care room, they allowed us to stay in the quiet room on two camp beds. This was so appreciated as I wouldn't have left Savannah until she came home, even if that meant sleeping in a chair. I was helped to breast feed, we were supported through slow weight gain, oxygen fluctuations and temperature difficulties until we were ready to come home. We brought in our car seat to test Savannah in it and after a long day of sorting out medication we were allowed home.

Our total stay was 54 days and strangely, it all felt like an incredibly positive experience. 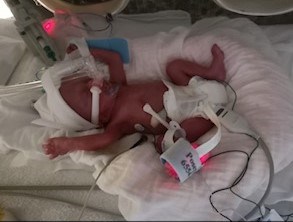 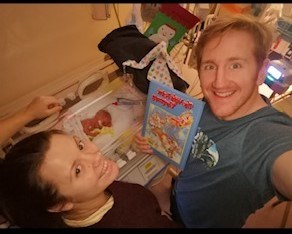 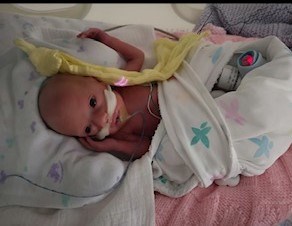 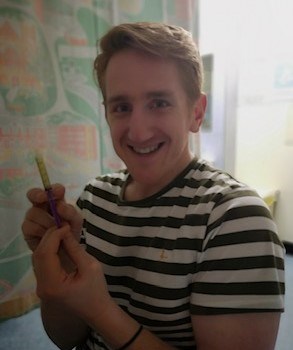